Home News Feed How Jonathan Approved the Swap Deal – PDP Makes Revelations on the...
Facebook
Twitter
WhatsApp
As reactions continue to trail the release of 82 Chibok schoolgirls released by Boko Haram last weekend, the Peoples Democratic Party (PDP), has made some revelations oh how the swap deal was brokered. 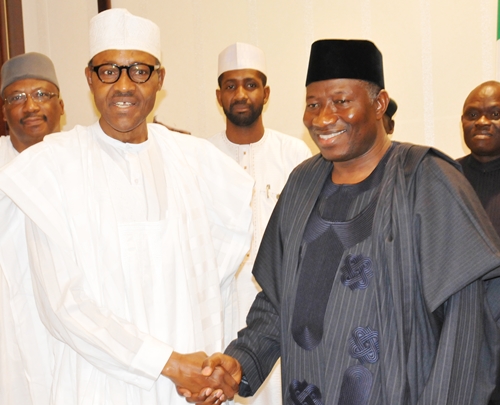 While speaking at a press briefing in Abuja on Monday, the PDP deputy National Chairman, Dr. Cairo Ojougboh, stated that the swap deal under which the 82 Chibok girls were released on Sunday, was approved by the immediate past president, Dr. Goodluck Jonathan.
Ojougboh, who was reacting to statement by the party’s caretaker committee on the swapping of some Boko Haram insurgents with the girls, said no price was too big for the freedom of schoolgirls, abducted three years ago.
The caretaker committee led by Senator Ahmed Makarfi had in a statement issued by its spokesman, Prince Dayo Adeyeye, on Sunday, faulted the release of suspected Boko Haram detainees in exchange for 82 of the abducted Chibok girls, describing it as an “unusual price.”
Ojougboh, who said he was part of the federal government term that negotiated for the release of the Chibok girls in 2014, explained that the moves that culminated in the release of the girls started during former President Jonathan tenure.
According to him, former President Jonathan apart from authorising the swap of some Boko Haram detainees with the girls, had also set up a term to negotiate with the  insurgents to secure the release of the girls. He said regrettably, the swap deal was scuttle at the last minute.
Ojougboh said: ”Let us make it very clear that the effort and the battle for the release of the girls started a long time ago. Some time in May 2014, a consultant of the World Bank visited Nigeria and approached Chief E.K Clark and told Chief E.K Clark that the Chibok girls were alive and could be rescued.
“Chief EK Clark made contact with the then president Goodluck Jonathan…Arrangement were made to release the chibok girls some time in May 2014. I went for the meeting for the exchange.
“Conditions were set. Conditions that were set involved the release of the Boko Haram prisoners. When the Boko Haram representatives met us first, they said ten of their mallams were arrested in Bauchi when they were praying. When we took the information to the DSS and then Chief of Defence Staff(Alex Badeh), they laughed.  They said those that were arrested were hardened Boko Haram members.
“We took the information to the President. The President said whatever it takes to release the Chibok girls, any swap that this people demand, he approved it. Jonathan approved it.”
Ojoughoh added after Jonathan left office in 2015, the negotiations continued with Switzerland Embassy and the International Red Cross playing key roles.
The PDP deputy national chairman, who lauded the President Muhammadu Buhari administration for the release of the 82 girls,  urged the government to everything possible to secure the release of the rest of the girls still in Boko Haram captivity.
“We are very happy that the 82 girls have been released. We are also concerned about the remaining girls.We urge the federal government to continue this process of negotiations and do whatever it takes for the release of the remaining girls should be done,” he stated.
Ojougboh urged the public to disregard the comments by the PDP caretaker committee on the swap,  noting that the committee does not have the authority to speak for the party on any issue.
Besides, he added that it is better for all offenders to be set free than for one innocent person to suffer unjustly.