Home News Feed Jungle Justice: Angry Residents Strip Thief N*ked Before Beating Him to Death...
Facebook
Twitter
WhatsApp
An unfortunate criminal has met his untimely death in the hands of an irate crowd after he was caught stealing from a house. 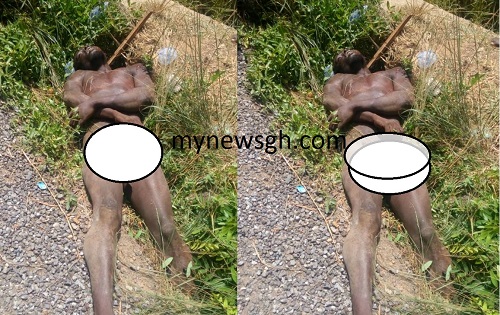 A 26-year-old taxi driver only identified as Kwame was on Thursday afternoon lynched at Wassa Akropong in the Amenfi East District of the Western region on suspicion of theft, MyNewsGh.
According to the report, the dead thief was reported to have broken into the room of a resident through the window and made away with his phones, cash and other valuables.
Luck however eluded him when he tried leaving the room of his second victim in another house where he broken into and stole a number of mobile phones, watches and some necklaces.
He was spotted by some youth who flagged him to stop but he took off and was given a hot chase by the youth who accosted him close to the Wassa Akronpong District Court with the assistance of some other persons in view of the fact it was a market day in the area.
Obeng Mframa, a local journalist in the area disclosed that he was without interrogation subjected to severe beatings by the angry youth who retrieved the stolen items from him.
Not satisfied with what was meted out to the suspect, they stripped him naked and kept pummeling him with various offensive weapons until he lay unconscious with no effort by onlookers to rush him to any health facility in order to resuscitate him.
“The police came for him at about 6Pm by which time he was already dead”, he said.
The body has since been deposited at a morgue in the area with police indicating that investigations have commenced into the incident to apprehend the perpetrators behind the act.