Serie A giants, Juventus have qualified for the final of the UEFA Champions League to be played in Cardiff, the old ladies completed a double over Monaco on Tuesday night in Turin. 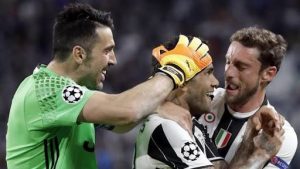 Juventus beat Monaco 2-1 in Turin on Tuesday to progress to the Cardiff final on a 4-1 aggregate having won the first leg 2-0 a week ago in France.

Old war horse Alaves was crucial again as he provided an assist and scored the other goal that ensured Juve were convincing winners in Tuesday’s second leg clash.

The Brazilian and ex-Barcelona defender had also provided the two assists that saw Juve shock Monaco in their backyard last term.

Though Kylian Mbappe scored in the second half to half the deficit on the day, it was not enough as they exited the competition after a fine overall performance.

Juventus have been tremendous in the run to the final, churning out breathtaking results including the sending off Barcelona who failed to score over two legs.

The Old Lady will now await to see who will join them in the final between Real Madrid and city rivals Atletico.