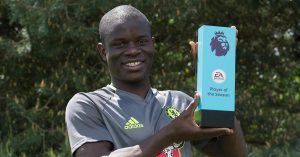 He has become just the second player to win the Premier League with different clubs in back-to-back seasons, having been an integral part of Leicester’s title-winning campaign last term.