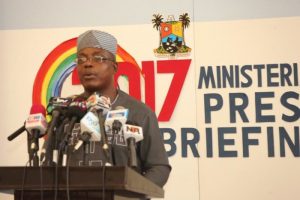 The Lagos State Government on Monday announced that it has paid the sum of N11.75 billion to 2,886 retirees under the Contributory Pension Scheme, CPS, in the last one year.

Commissioner for Establishments, Training and Pensions, Dr. Benson Oke disclosed this at a ministerial press conference in Alausa, Ikeja, Lagos, Southwest Nigeria, adding that government’s funding of employees’ pension rights under the CPS since inception stood at N138.4 billion.

According to Oke, the state government, through the Lagos State Pension Commission (LASPEC) had paid the sum of N11.75 into the Retirement Saving Account (RSA) of 2,886 retirees, out of which 1,291 of the retirees were from the local government and State Universal Basic Education Board, SUBEB; 697 from Teachers Establishment Pension Office, TEPO; 887 from the mainstream service and 11 from parastatals.

Oke added that there had been regular deductions of 7.5 per cent from the salaries of staff and corresponding 7.5 per cent by the state government into the RSA maintained by them with their appointed PFAs.

“As at March 2017, these deductions have cumulatively risen to N78.592 billion since the inception of the scheme in 2007. This administration has not relented in the bailout of the local government and State Universal Basic Education Board (SUBEB) retirees. The Governor magnanimously gave instructions for state government funds to be utilised to pay retirees from local government,” he said.

“In essence, Lagos State Government’s funding of employees’ pension rights under the Contributory Pension Scheme in a period of10 years is approximately N138, 413.560 billion,” he added.

He revealed that the state government, through the commission had paid to beneficiaries of deceased employees Insurance benefit worth N170 million.

Oke added that the insured death was by law to be paid to named beneficiaries to alleviate the immediate needs of the family members of a deceased person, saying that the Estate of a deceased staff is also entitled to receive the balance in the retirement account and accrued rights due, if the employee had joined service before the commencement of the CPS.