Deolu
The death of Mr. Solomon Ugodi who rolled off the corridor of a four-storey building and died has left many people in serious shock. 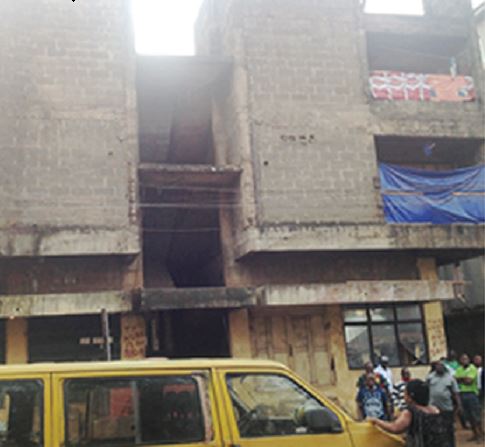 A man has left many people in shock after he rolled off the corridor of a four-storey building while asleep and died in Onitsha, Anambra State. NewTelegraph reveals how the sad incident happened in this report made available by Okegwo Kenechukwu.
*************
It is no longer news that many Nigerians have taken to dangerous ventures to survive the present economic recession. There were stories of families who sold their children for as little as N 15,000 to keep body and soul together.
The death of Mr. Solomon Ugodi, a.k.a Onugbu, in Onitsha, Anambra State, recently, is one death that will ever remain indelible in the minds of his family friends and all those who had ever come across him.
The 35-year-old Solomon was, according to his relation, an occupant of a one bedroom flat at Awada in Idemili North Local Government Area before he relocated to an uncompleted building with his family at Oranyelu Street by Court Road in Onitsha North Local Government, where he met his mysterious death recently. New Telegraph gathered that the late Solomon was a driver of a Combi Bus with registration number LSR 288XB, which he used as a commercial Bus within Onitsha and its environs.
The father of two hailed from Amokpo Ozara community of Igbo Etiti, Enugu State. The late Solomon, according to his relations was sleeping at the top most floor of a four story building at one of the balcony of his own apartment that fateful day and as he dosed off, he did not know when he rolled off in the midnight and crashed with his head on the ground and died instantly.
A close relation, Mr. Matthew Agbo, told our correspondent that he relocated to the uncompleted building some four years ago because he could no longer pay for his house rent in Awada and as well cater for his family, his aged mother and other siblings, having lost his father at a tender age and since then has become the bread winner of the enlarged family Asked if he was drunk, his brother, who was wailing uncontrollably, said: “No, he wasn’t even into alcohol. He was a complete gentleman and an ardent Christian”.
The wife told New Telegraph: “This is where we are living and he came back from work last night, took his bath and his dinner and decided to sleep outside here to get fresh air. He is used to taking rest there after close of work, because he is not the type that goes out in the night”.
The late Solomon, New Telegraph gathered was a member of the town union and their constitution does not guarantee keeping of their dead colleague for so long after death.
That was why he has since been buried in his home town, Ozare in Igbo Eliti, Enugu State. The Ozara Community Town Union, Onitsha Branch, said that they reported the incident to Onitsha Central Police Station before taking the dead body to the Onitsha General Hospital Mortuary.
Residents said they call the house one year, one block and the owner of the building, an indigene of the town, died some years ago but his sons are living outside Nigeria and seldom come home.
One of the residents, an Onitsha indigene, confided in New Telegraph that mysterious deaths had been happening in the same building. The first victim was an Abakaliki woman, who was doing menial job with her only daughter.
He said the woman was healthy the day she died as nothing was happening to her as at the time the daughter said they went to bed but she could not wake-up the next morning. The source, who did not want his name in print, said that the other person who died was an Hausa man engaged to dig the soak away pit but died when part of the pit caved in and buried him inside. New Telegraph spoke to some of the people still living in the building there.
A woman tenant accosted by our correspondent said the late Solomon killed himself. She queried why should he take the risk of sleeping where there was no protection? Why did he not use woods to barricade the area if he wanted to be sleeping there?
“He was living here before we packed in. We are all here because of the hardship and I believe one day, I will move out of this place because no condition is permanent. The incident has nothing to do with cultism. The man who owned the house they said died long ago and the children are all abroad. I am not blaming anybody but my God”, the woman stated.