Home News Feed Meet the 17-year-old Pastor Who Claims to Have Magic Powers and Can...
Facebook
Twitter
WhatsApp
A very young man has claimed that he is a pastor and is in possession of magic powers that can heal people. 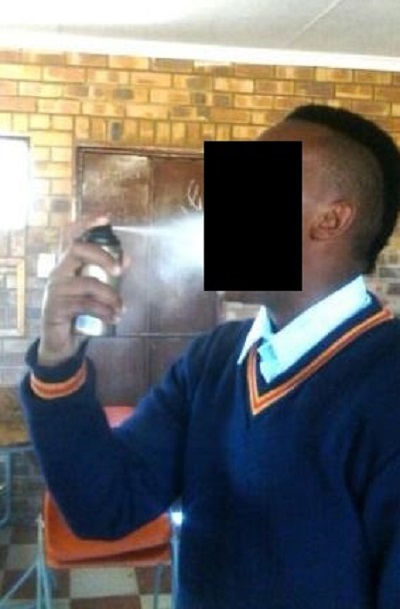 The ‘pastor’ demonstrates his powers in front of fellow pupils by spraying deodorant into his mouth. Photo by Samson Ratswana.  ~
Another South African self-proclaimed pastor who claims to have magic powers has stepped into the spotlight, according to Daily Sun SA.
This time it is a teenager, aged only 17, who claims that he has magic powers and that through prayer and fasting he can do anything.
According to Daily Sun SA, to take things to a new level, the boy has taken his powers to a high school in Soshanguve, Tshwane where he is a pupil.
And the department of basic education is extremely concerned about it!
In what he calls demonstrating and preaching, he walks on other pupils lying on the ground while he prays.
He told Daily Sun the school allows him to host prayer sessions on school days during their lunch break.
He said he gets about 70 pupils to attend each session.
“I also have prayer sessions after school but the attendance is not as good as at lunchtime because most kids rush to catch buses. My group is growing every day,” he said.
Demonstrating his powers in front of his fellow pupils, he sprayed deodorant in his mouth.
He said he started demonstrating in 2014.
“I was at a different secondary school at the time. I was taught to preach by a prophet from my church.
“He taught me to share the work of God through the Bible by preaching and demonstrating.
“I am happy with what I am doing and will continue to pray and show the people the power of God.”
According to Oupa Bodibe, the education spokesman, the department is extremely disturbed and condemns allegations of harmful religious practices by the pupil at the school.
“The district will visit the school to investigate all allegations. We will also engage with faith based organisations for a necessary intervention.
“The department will monitor the situation at the school,” he said.