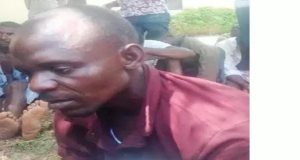 A suspected kidnapper who has  confessed before the operatives that he holds rich ladies against their will and demands ransom from them. The former soldier was arrested in Asaba, Delta state. The 53-year-old suspect was one of the over 173 persons arrested for armed robbery, kidnapping and cultism.
While confessing to the crime, he said “My victims have always been females. I have never gone for my kind. I kidnap valuable girls, ladies and women and this has never failed us. I resigned as a soldier to concentrate on kidnapping.” The suspects were said to have been causing fear in the towns and villages in the state. Tola who comes from Adamawa state revealed that he resigned from the Nigerian Army of his own volition to start a four-man gang of kidnappers.
The former Nigerian soldier did not mention his victims even though he stated that he had been involved in the kidnapping of three female victims and the ransom they paid fetched him a whole lot of money. He also revealed that his gang had not killed anyone. “We did not kill any victim and no victim had died in our hands.
We make money from the game (abduction) and set them free thereafter.” The game changed after Tola had plans to collect N1m from the family of a kidnapped victim at Gabbs Supermarket on Okpanam Road in Asaba; it was there that detectives surrounded him and he was picked up.
Zaana Ibrahim, the state commissioner of police and his PPRO, DSP Andrew Aniamaka, along with the team of detectives said the suspect had remained notorious because of his military background. The commissioner revealed that he could have outsmarted the men the day he was arrested but his tactical withdrawal failed him.
Although his gang members are yet to be caught, Ibrahim revealed that they target their victims at places of interest like at the supermarkets, eateries, relaxation centers and so on. The chief police said Tola and the other suspects would be arraigned as soon as the investigations are completed