An eight-year-old girl is the youngest named so far of the 22 victims killed in a suicide bombing at a pop concert in Manchester, England late Monday.

Here is what we know so far about the victims of the terror attack claimed by the Islamic State group, which is the deadliest in Britain since 2005.

– ‘Beautiful little girl’ –
Eight-year-old Saffie Rose Roussis from Leyland, a town in Lancashire, northwest England, is so far the youngest reported victim of the attack. 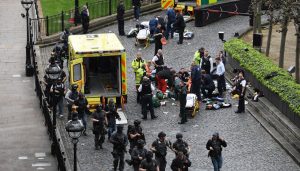 She reportedly attended the concert with her sister, believed to be in her 20s, and mother.

Chris Upton, the headteacher at Tarleton Community Primary School, described Saffie as “a beautiful little girl in every sense of the word”.

“She was loved by everyone and her warmth and kindness will be remembered fondly,” he said.

– Studying health care –
The death of Georgina Callander, believed to be 18, was confirmed by her school, the Runshaw College Sixth Form Centre in Lancashire.

“It is with enormous sadness that it appears that one of the people who lost their lives in Monday’s Manchester attack was one of our students here,” the school said, adding that she had been studying health and social care.

– 59 wounded –
Among the scores of wounded who were treated at Manchester Arena after the attack, 59 people were taken to the hospital, including 12 children under the age of 16, according to the Press Association news agency.

In a statement outside Downing Street on Tuesday morning, Prime Minister Theresa May said that many of the wounded were being treated for “life-threatening conditions”.

– Crowdfunding –
The Manchester Evening News, a local newspaper, launched a crowdfunding campaign to support the families of those affected by the attack, with a goal of raising 300,000 pounds (347,000 euros, $390,000).

Within six hours, the campaign had raised over 250,000 pounds.