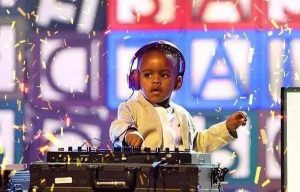 The youngest DJ in the world is Oratilwe AJ Hlongwane, popularly known as DJ Arch Jnr,who has been tagged as not just an ordinary kid. At just five years old, the Johannesburg-born South African is probably the world’s youngest DJ. In 2015 when he was just three years old, he absolutely took South Africa’s Got Talent show by storm, impressing judges and fans to win first prize.
His amazing talent and exploits did not end there, however. Today, he is a popular DJ and is a regular performer at entertainment events both locally and around Africa.
Among many other gigs, DJ Arch Jnr has performed at the South African Film and Television Awards (SAFTA) and the All Africa Music Awards (AFRIMA) in Nigeria.
He has also been a resident DJ at McDonald’s Under-14 schools Soccer League in South Africa. His father, Glen Hlongwane, said in a recent interview that DJ Arch Jnr started displaying musical talent when he was just a few months old.
Source: ( gossip.naij.com )