Home Entertainment When I met my wife, the only property I had was my...
Facebook
Twitter
WhatsApp
In an interview with Punch, popular Nollywood actor,  Olaniyi Afonja a.k.a Sanyeri, talked about his wife of 10 years and how they met. 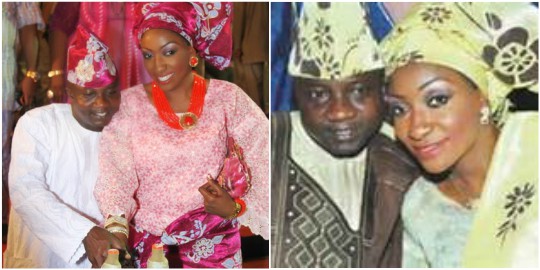 Sanyeri said: ” Imet her in 2004 when I want to screen my movie, Okan Emi, at the National Theatre in Iganmu, Lagos.

She came there to have a good time. I sighted her and her friend from afar. I
walked up to her friend and told her I liked her friend but she said I should tell her myself. So I went to her and told her I would want us to get closer but she replied that was it because I just shot a movie that made me think I could ask her out.

Afterwards, she walked away. After that day, I saw her about a month later and I requested for her number. Even then, it took me a while to convince her to date me.” On his most memorable moment with her, he said: “I always remember those times that we didn’t have much and she stuck by me.

When my wife gave birth to our first child, I had just N3, 500 with me, so it was quite tough. That’s why I always say that there is nothing I cannot give my wife. As of the time she married me, the only property I had was my tribal mark.”

While advicing young couples, he said: “We could not have a wedding anniversary celebrating until six years after we had been living together as husband and wife. And what I’m trying to say is that my wife stayed with me, right from when there was nothing.

My advice for young girls is that they should not discard suitors, just because the person is not rich. So far the person has potential and focus, take the risk and stick with him. There are some people who started off as rich but became poor over time. Nothing lasts forever.”