The Ministry of Women Affairs will take custody of the 82 Chibok girls rescued by the Federal Government four weeks ago will on Tuesday (today), where they will begin proper rehabilitation. 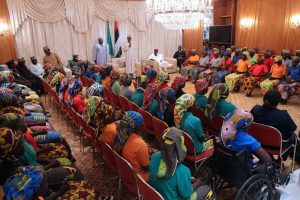 This was made known by the Minister of Information and Culture, Alhaji Lai Mohammed, who said this during an interview with pressmen.

The minister said the 82 girls, who have been in the custody of the Department of State Services since their rescue, were made to undergo several medical tests and treatment.

Some of the girls were said to have had bullet and bomb fragments in their bodies and were made to undergo surgeries.

Mohammed said the girls would  be handed over to the Women affairs ministry at the Woman Development Centre, Abuja.

He said, “The 82 girls went through medical and mental tests. Some had bullet wounds and their treatment took longer. Now, they have completed all medical procedures and will be handed over to the Federal Ministry of Women Affairs.

“The girls will be taken to a new facility. The old one was basically a medical facility because the purpose was just to examine them and treat them. So, any of them that needs further treatment can continue at the new facility.”

At least, 219 Chibok girls were abducted from their school in April 2014. While the government rescued 103, three others were said to have escaped from Boko Haram captivity. At least 113 are still in the hands of the terrorists.

Although, the rescued girls have met their parents under strict government supervision, none of them has returned to live with their parents in Chibok.

It remains unclear when the girls will return home.