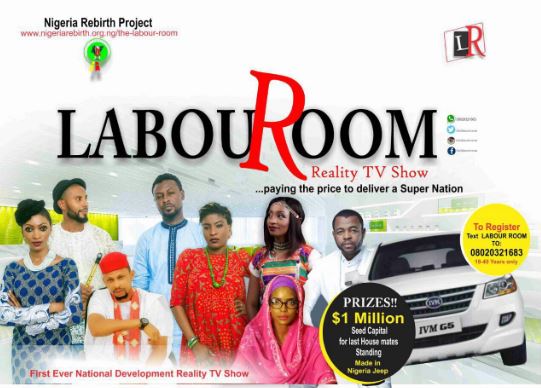 All is now set for the first ever national Reality TV show, tagged ‘ The Labour Room,’ as the organizer have now announced the conclusion of a three (3) day training for the 37 contestants of the Reality show. Recall that 37 contestants were chosen from across the country to participate in the ‘Labour Room’ Reality Show where questions of national concerns would be raised and addressed. Besides the serious issues the show tends to address, it will thrill Nigerians as it has been designed by the organizers to equally entertain.   At the end of the reality show, four winners will emerge and they will share N200 million as prize money. Ahead of the kick-off of the show, the thoroughly-selected housemates went through intensive sessions to have a better picture of what their 60-day stay in the mansion would look like and to understand their roles as housemates. Captains of industries from all walks of life were on ground to facilitate, and drill the contestants on the ideals of the show. One of the organizer’s strong positions is to sensitize against sexual abuse, immoral relationship, and other immoralities.   Relatively, the show will address the question of religious and ethnic tolerance. Addressing newsmen at the conclusion of the training session, the National Coordinator of the project, Comrade Isaac Balami David reiterated that the organization cannot allow immorality and socio-economic decadence to fester, and as such, the Nigerian youth should take up their destiny in their hands. The show is being organized and powered by the Nigeria Rebirth Foundation, a project inaugurated at the Banquet hall of the Presidential villa in March, 2016. The show has as its grand patron – Mrs. Aisha Buhari, the wife of the President of Nigeria, Alhaji Ibrahim Coomassie, Nigeria’s former and longest-serving Inspector General of Police, as Chairman of its governing board and the Ooni of Ife as its Royal Father.