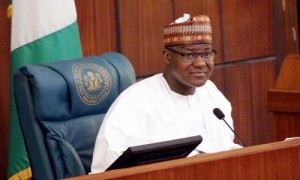 Speaker of the House of Representatives, Yakubu Dogara, has confirmed that  the Nigerian parliament will pass a new wage bill for Nigerian workers.

Mr. Dogara noted that due to the rising cost of living in the country, increasing workers’ salary had become necessary.

According to a statement by his Special Adviser, Media and Public Affairs, Turaki Hassan, to mark the 2017 Workers’ Day, Mr. Dogara said the House was committed to passing a new minimum wage bill.

“While commending you for your commitment to the service and building of the nation, I wish to assure you that the National Assembly remains committed to the passage of the National Minimum Wage Bill when presented by the executive,” he added.

Commenting further, he stressed that the eight House of Representatives was committed to initiating other laws and legislative interventions that would promote the welfare and well being of Nigerian workers.

He, however, enjoined workers, especially civil servants to re-dedicate themselves to duty and support government’s laudable policies and programmes.

“I urge you to commit yourselves to doing even more in supporting government’s activities that will better the lots of our citizens,” he said.

Meanwhile, Oyo State Governor, Abiola Ajimobi, has said he would ensure that the state clears the four-month salary arrears being owed its workers.

The governor, in a congratulatory message released on the occasion of this year’s Workers’ Day, assured the state workers that he feels their pains in the face of the biting economic dictates.

Mr. Ajimobi urged the workers to continue to put in their very best and key into the state government’s reform agenda aimed at enhancing productivity and ultimately increase the internally generated revenue.

“We will spare no effort to ensure that we clear the four-month salary arrears. I urge you to play your part dutifully to achieve this,” he said.

“No doubt, times are hard because of the pervading poor state of the economy. I feel your pains and I’m optimistic that we shall soon sing a new song of prosperity and abundance.

“May none of you be missing by that time,” he added.

Similarly, the organised labour in Kogi State, Sunday, cancelled the celebration of this year’s May Day in the state.

The News Agency of Nigeria, NAN, reports that the labour unions cancelled the celebration in protest over the non-payment of workers’ salaries and monthly pensions of retirees.

According to a statement jointly signed by the state Chairman of the NLC, Onu Edoka, and his TUC counterpart, Ranti Ojo, the decision was taken in solidarity with the affected workers and pensioners.

The unions argued that the non-payment of salary to a large number of workers and pensioners over the past 14 months has destroyed the civil service and the workforce of the state.

They also expressed concern over the increasing hardship being faced by workers and pensioners affected by outcome of the screening exercise conducted by the state government.

“The non-payment of salary and pension, has led to the loss of lives and also brought untold hardship to workers in Kogi State,” the statement said.

They unions also decried the refusal by government to make available to the organised labour, copy of the report of the screening appeal committee, describing the measure as a deliberate move to prevent the labour from taking a position.

“In the face of all these negative happenings, it is therefore advisable for workers not to make themselves available for any act of molestation, harassment and intimidation by any security agency,” the unions said.

“All affiliate unions are to adhere strictly to this resolution, which is in solidarity with workers and pensioners that have not been paid in the last 14 months, including those that have lost their lives during the period,” they said.

In his reaction to the complaints, Kingsley Fanwo, Director-General, Media and Strategy to the Kogi state governor, said government would convene a meeting of stakeholders soon to take a common position on the report of the staff screening and verification committee.

Mr. Fanwo noted that the objective of the screening was not to sack workers, but reform the civil service for optimum performance.

He however said that those who secured employment with fake documents would not be spared.