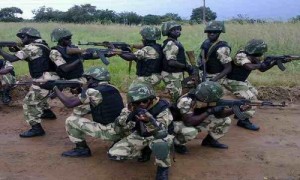 The Ese Odo Local Government Area of Ondo State have not experienced peace for the past couple of days, just after a militant group engaged in a shootout at a creek in Ajakpa community with the militants in the environment,  the military men allegedly attacked the community on Wednesday and allegedly burnt a large number of houses, while unspecified number of residents were reportedly killed.

The soldiers, operating under Operation Safe Delta, had on Monday attacked the militants, killing the leader of the gang identified as Ossy Ibori, and 15 members of the group. Three soldiers reportedly lost their lives in the battle.

It was gathered that some soldiers were later deployed in the community to ensure that normalcy returned, as well as find the fleeing members of the militant group.

But the narrative changed on Wednesday when the military men allegedly shot at residents and burnt houses.

One of the leaders of Ajakpa community, Mr. Tonye Ebitibituwa, told newsmen that only churches were spared by the soldiers.

He said, “This morning (Wednesday), the military men came to the community with six gun boats and attacked our community. They set the town ablaze. Ajakpa community did not support the killing of the soldiers by Ibori’s gang.

“The community did not in any way support Ibori, but the ongoing action of the military has no human face. Setting the community on fire is unnecessary.”

Ebitibituwa  disclosed that over 20,000 residents of the community had been rendered homeless while many houses were affected in the community.

He urged the Ondo State Governor, Mr. Rotimi Akeredolu, to set up a rehabilitation committee to save the lives of people of the community.

“The inhabitants of Ajakpa community have been rendered homeless without food, water and basic things of life.  We appeal to the Ondo State Government to assist the innocent people,” the community leader said.

However, the Public Relations Officer of the 32 Artillery Brigade, Captain Ojo Adelegan, denied that soldiers attacked the community.

He said those that were deployed in the community could not have involved themselves in any unprofessional conduct on the field.

He said, “The Nigerian Army did not burn houses or kill innocent people in that community. The protection of lives and property of Ajakpa community is our responsibility.

“The operation we went for was to flush out the militants so that peace would return to the community.

“If there is burning of houses anywhere, it should not be attributed to the army. Our men can never be involved in such an act.”