Nigerians have been advised by the Defence Headquarters to debunk any rumour of a coup plot that there was no such attempt in the country. 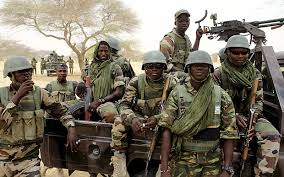 The Director, Defence Information, Maj.-Gen. John Enenche, allayed the fear at a news conference attended by Spokesman of the army, Brig.-Gen. Sani Usman and a representative of the Navy spokesman.

It would be recalled that the Chief of Army Staff, Lt.-Gen. Tukur Buratai, recently warned officers and soldiers of the army not fraternise with politicians.

Enenche, therefore, said “In summary, I want to tell you, on behalf of the Armed Forces of Nigeria, that nobody should be afraid of any coup.

“The armed forces are totally loyal to the Commander-In-Chief and are in complete subordination to civil authorities.

“We are out there administering our troops to remain focus and be conscious of oath of allegiance that we have taken and are guided by the constitution of this country at all levels of command.

“We (military) are not different from what is happening all over the world, our armed forces, the present crop of officers and soldiers are in tune with the best international practices of governance and that is democracy.’’

On the warning earlier issued by the army chief to officers and soldiers to steer clear of politics, Enenche described that as “professionally a command responsibility.”

He said it was a required routine to personnel to conform to military ethics in all ramifications.

According to him, that includes interaction and exchange of visits among others.

“This command’s responsibility is exercised right from the highest echelon such as the office of the service chiefs to the lowest levels of command, hence the caution from the army in this case.

“Administratively, officers and men are regularly cautioned to exercise command and control by appropriate superior authorities through commanders at various levels.

“This is to prevent members of the armed forces from derailing from their core focus of total dedication to their oath of allegiance.

“However, it is pertinent to state that if there are signs of actions that point to likely breaches of military code of conduct as it were, cautions or warnings are issued, with possible investigation following it.”

According to him, the mere mention of coup plot from some quarters are assertions which are not confirmed.

On May 6, Buratai warned officers and soldiers of the army to steer clear of politics or have themselves to blame.

He also advised personnel who were interested in politics to “resign their commission or apply for voluntary discharge forthwith.”

The warning, he said, followed information received that “some individuals have been approaching some officers and soldiers for undisclosed political reasons.”

On that basis, he advised such persons to desist from the acts.

Buratai reminded them that “Nigerian Army is a thorough professional, disciplined, loyal and apolitical institution that has clear constitutional roles and responsibilities.

“Any officer or soldier of Nigerian Army found to be hobnobbing with such elements or engaged in unprofessional conducts such as politicking would have himself or herself to blame.”