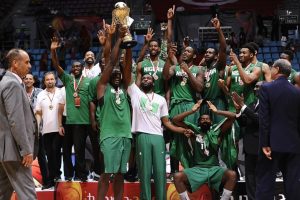 Nigeria’s D’Tigers  were  in Guangzhou, China, on Sunday drawn in Group B  of  the FIBA 2019 World Cup qualifiers alongside Mali, Uganda and Rwanda.

Guinea, South Africa, Cameroon and Tunisia  were drawn in Group A while Congo, Egypt, Morocco and Angola occupy  Group C.

Mozambique, Senegal, Ivory Coast  and a yet-to-be-named team are in Group D.

The top five teams will qualify for the  World Cup scheduled to hold in China from  August 31 to September 15, 2019.

Meanwhile, 80  teams will compete for 31 places at the tournament alongside hosts China, with matches taking place during six qualifying windows. China will stage the tournament for the first time in their history, Insidethegames.biz reports.

The United States, who have won the last two World Cups, were  drawn in Group  C of the Americas qualifying competition.They will play Puerto Rico, Cuba and Mexico.

Serbia, silver medallists at the 2015 edition, will play Germany, Georgia and a yet to be determined qualifier in Gool G of the European section.

France, who won bronze two years ago, have been drawn alongside Belgium, Russia and another team that are still to be confirmed.