Deolu
Prosecutors in the United States will ascertain the psychological wellbeing of Nigerian journalist, Abdullahi Shuaibu who reportedly robbed some banks in the country. 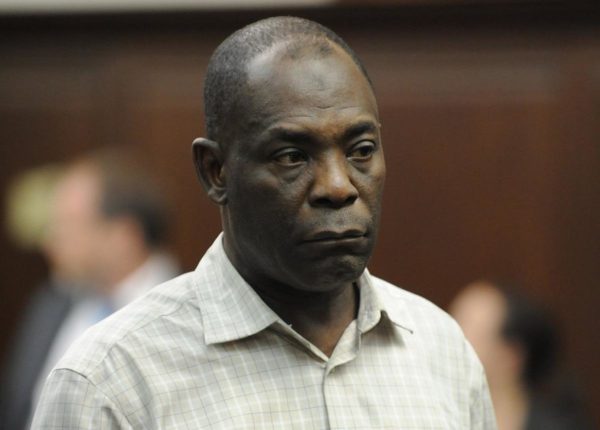 Abdullahi Shuaibu, the Nigerian charged with a string of bank robberies in the U.S. two weeks ago, got some relief from prosecutors on Monday  who amended the charge. Shuaibu was arrested on April 17 and accused by U.S. authorities of robbing four banks in Manhattan, New York.
When the matter came up for hearing, Shuaibu, who was present in the court, pleaded “not guilty”, through a member of his legal team, Tim Pruitt.
The News Agency of Nigeria (NAN) reports that the case has been changed from ‘First Degree Robbery’ to ‘Attempted Robbery’ in the ‘Second Degree’ and ‘Robbery’ in the ‘Third Degree’.
Consequently, the case also moved from Class ‘B’ felony to  Class ‘D’ felony, which is a significant reduction in the charge against him. NAN reports that with the significant reduction in the charge, Shuaibu’s  jail exposure has also been significantly reduced.
Pruitt, after taking the “not guilty” plea for Shuaibu, sought for an adjournment. The judge adjourned the matter until June 26. Another member of the defence team, Olayinka Dansalami, told NAN that Shuaibu had a hope of even a lighter sentence and that his legal team was not resting on its efforts.
“With the class ‘B’ offence, Shuaibu could receive a jail sentence anywhere from five to 25 years in jail.
“But with the class ‘D” offence, he can get ‘conditional discharge  ‘time serve’ or ‘probation’ but the maximum sentence is five years in jail,” he said.
‘Time serve’ is a condition whereby an accused is sentenced to the time already served in detention.
‘Conditional discharge’ is where an accused is given another chance but warned to be of good behaviour for a period of  time,’’ Dansalami said.
“The charge against him has also moved to ‘non-violent charge’ from ‘violent charge’. We thank God for the reduction.
“We (defence attorneys) will continue to fight the case vigorously and aggressively despite the reduction of his jail exposure. Our goal is to spare our client of any time in jail.
“His bail condition has also been reduced.
“But we may be able to further reduce the bail if someone can come forth. So, overall, there is a change in circumstances and it is not as serious as before.
“Within the next few days, we will look at a lot of options that will help him.”
According to him, now that the severity of the charge has significantly reduced, it behoves the judge to temper justice with mercy.
“Before, when he was charged with ‘class B’ felony, the best a judge can do is to give him minimum sentence of five years on each of the two ‘B felony charges.
“But now the judge can do something because of the reduction of the charge. The judge has some latitude to lessen the sentence from conditional discharge or time served or probation up to five years.
“So to be clear, despite the fact that the charges have been reduced, our approach to the case remains the same.
“We are not taking anything for granted and we are committed to defend our client to the best of our abilities.’’
Dansalami said one of the best social workers in the State of New York, James Graves, has already been assigned as part of the team to help ascertain Shuaibu’s psychological wellbeing at the time the offence was allegedly committed.