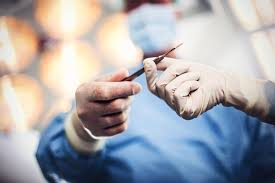 Sulaiman, who is from Ajase-Ipo, Irepodun Local Government Area of Kwara State, added that it was the first time the MIS technique had ever been performed in Sub-Saharan Africa.

The medical practitioner tod News men  in Ilorin, the state capital, that the surgery was performed at EuraCare Specialist Hospital in Victoria Island, Lagos State.

He said, “The surgery went successfully and the patient had immediate relief of his symptoms, walking on day one after surgery.”

Sulaiman, a world-renowned professor of neurosurgery from Ochsner Health System in the United States, explained that MIS surgery was a modern surgical treatment of back/leg pain and neck/arm pain.

He added that patients recover quickly and can return to their daily activities faster.

The neurosurgeon described minimally invasive technique as the future of spine surgery, similar to laparoscopic surgery for general surgeons.

The expert in the MIS technique said he was determined to bring the modern surgical technique to Sub-Saharan African countries.

He added that he planned to open branches across Nigeria and other African countries.