An EU spokesperson has told North Korea that the test-firing of a ballistic missile constitutes a “threat to international peace and security” as Pyongyang ratchets up tensions in the region. 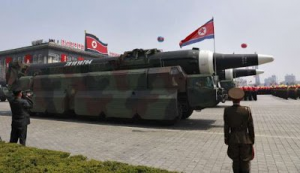 “This and previous launches constitute a threat to international peace and security and further aggravate tensions in the region at a time when de-escalation is instead needed,” the spokesperson said in a statement.

The missile was launched early Sunday and flew more than 700 kilometres (435 miles) before landing in the Sea of Japan (East Sea).

Several analysts saw the launch as a test for South Korea’s new President Moon Jae-In, a liberal who has said he wants to ease tensions with the North.

“The DPRK is expected to comply with its international obligations: it must halt these launches and abandon its ballistic missiles programmes in a complete, verifiable and irreversible manner,” the EU spokesperson said.

The statement also said the EU was ready to support “a credible and meaningful dialogue” between Pyongyang and international leaders.

But multiple sets of UN and US sanctions against North Korea have done little to deter its pursuit of its nuclear and missile ambitions.

The latest test was the North’s first launch since a US missile defence system that has been deployed in the South became operational on May 2, and comes shortly after a failed ballistic missile test on April 29.