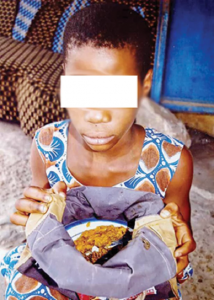 The Ondo State Police Command has confirmed the arrest of a 14-year-old housemaid identified as Mary Akinnifesi for allegedly attempting to kill her 63-year-old boss, Alhaji Nasir Akinlosotu. According to information gathered by  NAIJ.com, it was  gathered that wife of the victim had instructed Mary to prepare beans for the house before she carried out the devilish act.
When Mary was through preparing the meal as instructed, she put rat poison in the portion which she served her victim. Thankfully, the victim was sensitive enough to suspect the offensive odour from the food which he was served.  Narrating how he escaped death, Akinlosotu described his survival as God in action. He said that he had never thought that the maid will ever do such an evil act simply because he chastised her for being careless which she confessed to.
“I had even put a spoon of the beans in my mouth and about to swallow it when I discovered offensive odour and unpleasant taste from the food”, the victim said. “I immediately vomited the beans and called Mary to ask why the beans was smelling in such a manner and the taste was awful but she claimed she added spice”. He said her explanation was not convincing so he decided to invite his neighbours to join him as he further questioned her.
“It was in the course of interrogation by neighbours that the housemaid confessed that she crushed the medicine meant for rat that was bought few days ago by my wife and poured it into my own share of the food” “She later stated that she decided to add the poison into my food in retaliation for the correction which I made when she committed an offense in the house. “After the confession, I contacted my wife by phone and narrated the incident to her. “Upon her arrival in the house, she decided to report the matter at Yaba Divisional Police Station in Ondo town for further investigation into the matter”.
AdvertisementClick Here To Join The 10,000 Naira Giveaway For 100 People!