Home News Feed Outrage as Young Woman is Kicked Out of Bank for Wearing a...
Facebook
Twitter
WhatsApp
A young woman has been left all teary after she was thrown out of a bank because she was wearing a hijab. 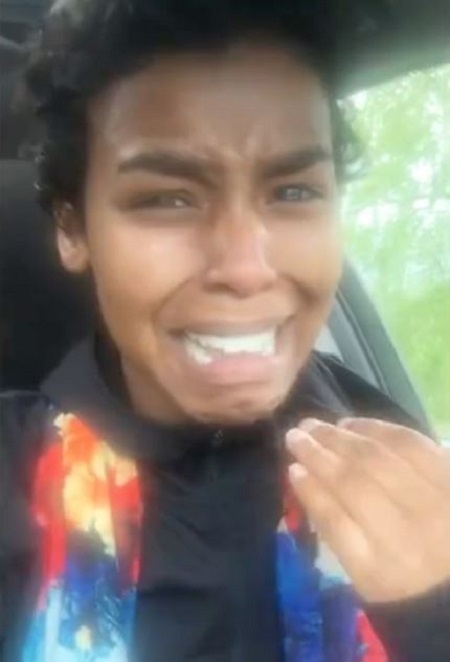 Jamela Mohamed, a young American Muslim woman was allegedly kicked out of a bank in the US because she was wearing a hijab.
According to Metro UK, Jamela Mohamed had gone into a branch of Sound Credit Union in Washington on Friday to make a car payment – something she’s done several times before.
On this particular day, she had been wearing a sweater and had the hood up because it was a Friday, which is when Muslims observe Jummah.
She didn’t think it was an issue but when she walked into the bank, she claims she was unfairly singled out for covering her head.
In a video showing the alleged discrimination, Jamela can be seen waiting at a cashier desk where a sign says hats, hoods and sunglasses are not allowed.
Jamela can be heard saying, ‘So they said please remove hats and hoods’ before the video pans to a few other male customers, who were wearing baseball caps with no issue.
She then asks the cashier: ‘Why am I witnessing a man being serviced with a hat on and I’m being told to take off my hood?’
‘This is my hood. My face is showing and so I currently do have an issue today. I’m being polite, I’m complying. I simply stated that I just need to pay my car note today.’
After returning from her car with a hijab on, the branch supervisor then intervenes and says she’s going to count to three and then call 911 if Jamela didn’t remove her hijab.
Jamela later told Komo News: ‘I didn’t even get to utter a word. She started screaming, “One, two, three! I’m going to call 911!”‘
The video then switches to Jamela in a car in tears as she says: ‘I feel so embarrassed right now’.
Sharing the video of her ordeal on Facebook, she wrote: ‘I never want this to happen to anybody and NOBODY should ever be treated this way. Thank you.’
Her lawyer, Thaddeus Martin, said Jamela did not have a problem with the rule, it was the selective treatment and how it was applied.
Martin told the site: ‘She is seen as a threat and she’s actually treated as a threat.’
Sound Credit Union has reportedly apologised on its Facebook page, admitting that they did not handle the situation well.
They reportedly stated: ‘It is clear our training needs to include more empathy and sensitivity to all cultures, because as a credit union, we believe in equal treatment of all people.’
Watch the video below:
Source: Tori