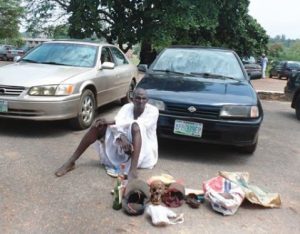 A 55 year old pastor was arrested by the Oyo State Police Command yesterday paraded over unlawful possession of a human head, buffalo horn, as well as gunpowder and charms.

The pastor, said to be the founder of Cherubim and Seraphim Church, Idapomimo Zion, Alagbado, Lagos, was arrested by security operatives during a “stop and search” operation, at about 10:30 pm on May 4 on his way to another branch of the church at Imini in Afijo Council of Oyo State.

However, Isaiah had an explanation: he wanted to use the human skull as fortification to ward off armed robbers from the land on which a branch of his church is being constructed.

In an interview ‘Prophet’ Isaiah a.k.a Agbojesu, said: “There was a demolition at Pakoto, Sango, Ogun State, where I reside, and it was there I found the human skull. Unfortunately, armed robbers have been disturbing us at my church branch in Oyo State, so I wanted to use the skull to make some spiritual fortification so that armed robbers would stop disturbing us there.

The charmed soap found with me is to get favour and mercy. I also intended to bury the horn found with me along with the human skull for the fortification, because it is a large expanse of land.

Although I am now a prophet, my father used to be a herbalist. That was how I learnt how to prepare some spiritual potions. But I know that Christianity does not support charms and diabolism. I started my church in 1980.

Apart from praying for my church members, I also help them prepare charms that will make people be at ease with them. I used to have about 26 church members, but the prophet who I employed to assist me took the members with him to establish his own church. I sincerely apologise and seek forgiveness from God, the government and the people.”