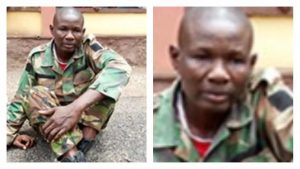 The Ogun State Police Command has arrested a 49-year-old man, Tunde Olatunbosun, who poses as a Nigerian soldier has been arrested for allegedly killing a tanker driver in Abeokuta. The suspect while he was in possession of one pump action gun, 43 live cartridges, military camouflage uniform and different vehicle plates. Olatunbosun who confessed to the crime while he was paraded alongside other suspected criminals on Monday, May 8, expressed that he intended to use the gun to scare people.
He further explained that he shot the tanker driver unknowingly. It was gathered that the suspect was arrested barely 48 hours after he reportedly shot the victim simply identified as, Rasaq, at a carwash in Leme area of Abeokuta.
It was gathered that Olatunbosun brought an unregistered Toyota Sienna car to the car-wash for cleaning services when an argument broke out and Rasaq was killed.
The Ogun state commissioner of police, Ahmed Ilyasu said: “On April 29, at Alaja car wash in Leme area of Abeokuta, one man named Olatunbosun Tunde, who brought his unregistered Sienna car to wash was engaged in an argument with a motor boy identified as Razaq.” “The argument came up over claims by the suspect that the vehicle which the deceased was working on obstructed his own vehicle.”
“All of a sudden, the suspect who was dressed in military camouflage knickers brought out a gun and shot the motor boy at a close range and the boy died on the spot.” “The suspect quickly rushed to his car and fled the scene leaving no trace whatsoever.”
Source: (gossip.naij.com )