The British police have confirmed the of a arrest of a 25-year-old man on Sunday and are also conducting a search of a house in connection with the suicide bombing that killed 22 people at a Manchester pop concert. 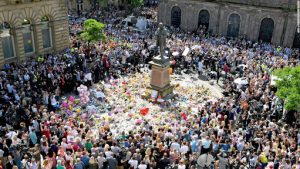 Officers arrested the man on terror charges in Old Trafford, to the east of the city, and were searching an address in the Moss Side area of Manchester, according to a statement from Greater Manchester Police.