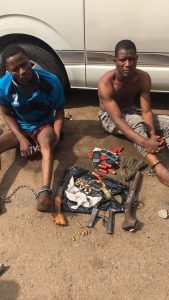 The police Intelligence Response Team says it has arrested four suspected kidnappers in Osun and Ondo State. Abba Kyari, Assistant Commissioner of Police and the Commander of the team, confirmed the arrest.

According to him, the suspects are Teslim Ibitoye, 38, Sunday David, 35, Akin Nureni, 40, and Akeem Ibitoye. Kyari said on April 25, police officers traced one of the kidnappers, Akin Nureni.

He said: “The suspects confessed to several kidnappings in Osun and Ondo State, including the recent blocking of one Mrs Basirat Ahmed while driving on a road at Dada Estate, Osogbo on April 11 and kidnapping her 8yr old daughter, Taiwo Ahmed.

They took the little girl to their hideout and demanded for N10m ransom from the parents, who eventually paid to get their daughter back.

Two of the suspects, Teslim Ibitoye and Sunday David, are receiving treatment at a hospital following bullets wounds they got during gun battle with the police. He said the police had been making serious efforts to arrest the remaining kidnappers.