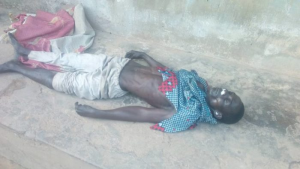 The Special Anti-Robbery Squad, Oyo State Police Command, have allegedly beaten a 50-year-old photographer, Kola Adeyeye, to death. According to reports, it was gathered that the victim was arrested along with four others in the Challenge area penultimate Friday.

The victim was said to be taking a herb concoction at a joint when the policemen raided the spot around 8.30pm, arresting everybody at the joint.

They were said to have been taken to the SARS office in Dugbe, where their statements were taken.

Our correspondent was told that after rounds of beatings, the suspects were taken to a courtyard, where the head of the SARS team interviewed them.

He was said to have cleared all the suspects, but ordered that they pay for bail before their release from detention.

It was learnt that while the four others paid between N25,000 and N40,000, the victim could not find anyone to raise the bail sum.

He was reportedly kept in detention for seven days before a man, sent by his pastor, paid N3,500 for his bail.

He was being taken home on a motorcycle when he slumped and died.

One of the suspects arrested with the victim said his own family paid N40,000 for his release from detention.

He said, “We were arrested on Friday, April 21, 2017, around 8.30pm. The man was taking herbs, while some of us were smoking. When we demanded to know our offences, the police said they were conducting a raid.

“They took us to their headquarters at Dugbe. When we arrived there, they first took our statements. They then took us to a room, where they descended on us. The beating was serious.

“The elderly man kept telling them that he was a photographer, but they didn’t listen to him.

“Later, they took us to a courtyard, called Assembly, where their boss interviewed us. By Monday, three persons had been released after paying some money.

“The policemen visited my house for a search and they did not find anything incriminating. They searched the man’s house as well without seeing anything. Their senior officer then said we were innocent and could be released as well after paying for bail.

“My family paid N40,000 for bail, but nobody showed up for the photographer. If he had been released on time, he probably wouldn’t have died.”

The resident, who tried to bail Kola, said he had gone to the SARS office for the bail of a suspect in another case when he sighted the victim.

He said when the police demanded N30,000 for his bail, he contacted the victim’s pastor, who urged him to negotiate the sum.

“I later returned on Friday and when the policemen saw me, they said I could bring N5,000 because the man was seriously sick and needed urgent medical attention. I told them that all I had was just N2,000. I borrowed N1,500 from a motorcycle rider that took me there to make the money N3,500.

“They said the money must be complete. I left to look for the balance. But before I got back to the place, I discovered they had asked another motorcycle rider to take him away because of his critical condition.

“It was on the way home that he slumped on the motorcycle and died. As I speak with you, they still have his mobile phone, which they seized pending when we would pay the balance of N1,500.”

The victim’s younger brother, Olaolu Adeyeye, said a neighbour alerted him to the arrest of the deceased.

He said, “I saw two of those that had been bailed and they said they paid N25,000 each before they were released. I didn’t have any money and had to call other relatives to raise the money. When the money was not forthcoming, I asked my neighbour, a doctor, to help us. I was later told they had brought him home. He was dead with a lot of torture marks.”

Olaolu described the victim as a hard working photographer who was killed for nothing.

The Oyo State Police Public Relations Officer, DSP Ajisebutu Adekunle, confirmed the incident, but denied that the police were responsible for Kola’s death.

He said, “The suspect was not tortured in any way. Are you aware that he died after his release from detention? The police did not torture him. Death can come anywhere, anytime. You are aware that people sleep in their homes without waking up. So, his death has nothing to do with his arrest and detention.

“He was not the only one arrested. He was arrested during raids of black spots. The command has embarked on raids of criminal hideouts to curtail the activities of criminals in Oyo State. On the issue of the bail money, I will find out. If it is true, appropriate measures will be taken against those responsible. Bail is free.”