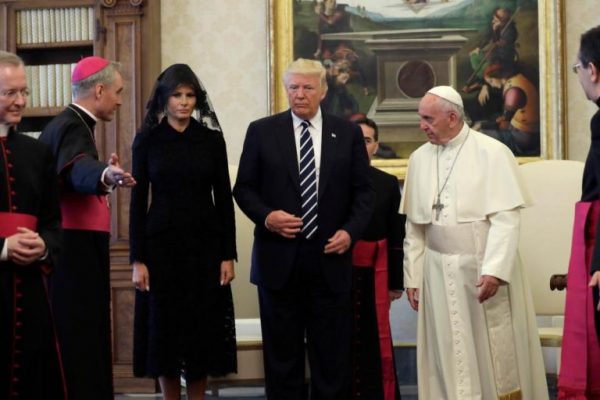 Pope Francis queried First Lady Melania Trump about her husband’s eating habits during a Vatican audience on Wednesday, but it is unclear whether they discussed “pizza” or a similarly named Slovenian cake, “potica.”
“What do you give him to eat?” Francis asked Slovenia-born Melania via an interpreter, in comments captured on camera.
In the original Spanish, the pope added a word that sounds like “potica,” but this was dropped in the English oral translation.
The First Lady replies, but it is unclear whether she says “pizza” or “potica.”
According to a media pool report by White House reporters, the exchange was always about pizza.
A Vatican source said they could not clear up the issue, but noted that Francis is a fan of potica, a kind of nut roll, and that he always asks about it when he meets someone from Slovenia.
The pope, however, is also known to like pizza.
In a 2015 interview with Mexican TV Televisa, joking about the drawbacks of being pope, he said: “The only thing that I would like is being able to go out one day, without anyone noticing me, and go to a pizzeria to have a pizza”.