Home News Feed Primary School Teacher Caught on Camera Dragging Little Girl Along the Floor...
Facebook
Twitter
WhatsApp
A primary school teacher has gotten tongues wagging after she was caught on camera dragging a little pupil by her hair through the streets. 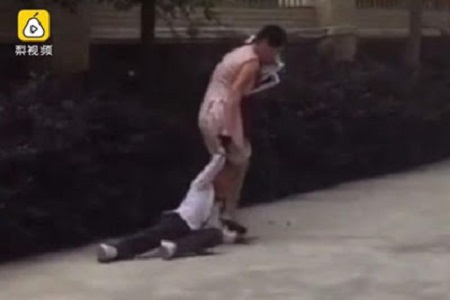 A startling video has emerged on the internet appearing to show a primary school teacher dragging a little girl by her hair.
The video shows the woman yanking the child along the ground by her locks while the youngster sobs and says she “wants to go home”.
A courier reportedly recorded the shocking incident at a foreign language school in Dongguan, in China’s Guangdong province on Tuesday.
According to reports, when the man confronted the teacher, she claimed to be the child’s mother and told the man it was none of his business.
But the courier did not believe the woman’s story and reported her to authorities, according to shanghaiist.com.
The teacher was reportedly suspended pending an investigation after the girl’s mother spoke to the school principal.
The video was posted on Chinese social media site Weibo where it was viewed more than 11,000 times.
Watch the video below: