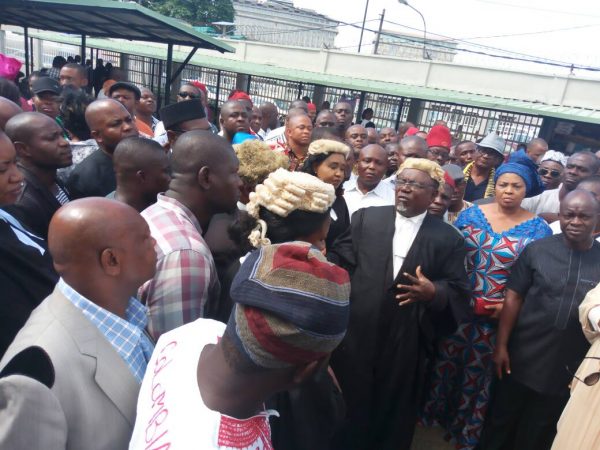 About 500 supporters of oil tycoon and businessman Ifeanyi Ubah protested in court on Thursday as the Department of State Services again failed to produce Ubah before Justice Muhammed Idris of the Federal High Court, Ikoyi, Lagos on Thursday, reports Authority.
According to a report, this is in flagrant disregard of the May 12, 2017, court order given to the DSS by Justice Idris, to produce Ubah in court today.
The detention of Ubah has left many of his supporters bitterly angry.
Leading the pack of those who have condemned the DSS continued detention of Ubah are Pan-Igbo group, Ohanaeze Ndigbo; Ohanaeze Youth Council (OYC); the National Association of South East Nigeria Students (NASENS), HURIWA, Governor Ayodele Fayose of Ekiti State and affected workers of Capital Oil and Gas.
Speaking to journalists, a Staff of Capital Oil, Mr. Tony Ogundipe expressed his frustration at the impasse. “We, Capital Oil workers are disappointed with the nonchalant attutude of the Federal Government in the resolution of this matter that has left over 2,000 of us temporarily jobless and redundant. The failure of the FG to call the conspirators to order is a blatant slap on the face of our democracy and sheer insensitivity to the plight of Nigerians”, he lamented.
Another staff of Capital Oil and Gas called on the FG to intervene in a bid to avert the impending starvation of their families. “The injustice meted on Dr Ifeanyi Ubah is negatively affecting over 2,000 workers of Capital Oil. The FG should be mindful of the implications on our families who are gradually been forced to starve”, he concluded.
With this latest failure to produce Ubah in court today, Justice Idris adjourned the matter for ruling on Thursday, May 25, 2017