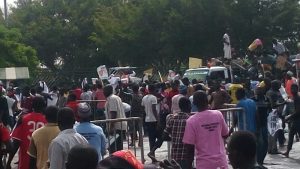 They said their buildings were reportedly demolished by a gang in company with policemen, who were said to be acting on the orders of the KICC’s authorities.

The protesters assembled at the entrance of the KICC, Lagos, around 10am while the Sunday service was ongoing. They were, however, denied access to the premises.

They displayed placards, some of which read, ‘Unlawful demolition of properties in Omu Arogun by Pastor Ashimolowo’s agents,’ ‘We are sleeping outside with our families since the demolition’ and ‘We legally bought our land from Morufu Odusola,’ among others.

PUNCH Metro learnt that the gang brought a bulldozer to demolish houses on the estate around 11am on Thursday, while riot policemen, numbering about 15, supervised the operation.

It was said that the incident happened when most landlords had gone to their workplaces, with no fewer than 24 houses reportedly brought down.

The protesters told our correspondent that they differently bought parcels of land from one Morufu Odesola, saying they were surprised to discover that the same land had been acquired by the pastor.

One of them, a widow, Mrs. Grace Apkama, whose three-bedroomed flat was demolished, said she built the house with the gratuity of her late husband, a police officer.

She said she had been thrown into distress since the demolition, adding that she had nowhere to go with her four children.

She said, “I bought a half plot from Morufu (Odesola) for N250,000 in 2010. I used the gratuity of my husband to build the house. It was a three-bedroomed flat. I lived there with my four children. I sell drinks to cater to my children. Two of them are in universities.

“On Thursday, I went to buy something in the neighbourhood. I was there when somebody came to tell me that some people were demolishing my house. I rushed home and met some riot policemen. They initially prevented me from entering into the house. I begged them to let me pick my belongings.

“I was in shock while I was packing. I was only able to remove some of my belongings. My children were not around. I watched as they demolished my house.

“There was no prior notice. I approached one of the policemen and told him that my husband was also a police officer. He said Pastor Ashimolowo had bought the land. He said it was not his fault and that they were sent from Abuja. I don’t know where to go. I have nothing.”

Another resident, Olabisi Rahmon, a carpenter, said he lost a four-bedroomed flat to the demolition. He said he was at work when he got the bad news, lamenting that his house had been levelled by the time he got home.

He said, “I left my house around 5am that day to work in Ayobo, Lagos State. Around 11am, I got a call that my house was being demolished. By the time I returned home, all my property, including a plasma television, a washing machine, a refrigerator and clothes had been destroyed.”

A woman, Iyabo Babatola, said her husband, who had gone to work in Lagos on that day, did not believe it when she informed him about the incident.

Another landlord, John Joshua, said, “I have a two-bedroomed flat. I bought the land from Morufu Odesola. I started living there in February 2016. I was not aware that our houses would be demolished. I have a wife and three children. We now sleep in the open air. The policemen told us that they were sent by Pastor Ashimolowo.”

An agent, Kayode Soboiki, said three buildings, which belonged to his clients who lived outside the country, were also affected, noting that one of the owners had been threatening him since he informed him of the demolition.

“I don’t know what to tell the other two now. I don’t want to be punished for what I knew nothing about,” he added.

An electrician and father of three children, Adesina Ismail, said, “I moved into the house in September, 2016. It was a four-bedroomed flat. By the time I got home, I was only able to pick a few things. I am appealing to Pastor Ashimolowo to look into our situation. We are peace-loving people and bought the land legally.”

An official of the church, who identified herself as an administrator, Modupe Mujota, enjoined the protesters to put their grievances in writing.

She said, “This is not going to work; I can tell you that. Please, do not embarrass him (Ashimolowo). If you do, then you have played your last card. That is the truth. The proper thing is for you to write a letter; deliver it to this institution and we will ensure that he gets it. He is not here right now.

Odesola, who spoke to our correspondent on the telephone, confirmed that he sold the land to the landlords, saying that the matter was in court.

He said, “I was also surprised when I was told that the pastor sent some people to demolish the houses. There is a case over the land at the Ogun State High Court, Abeokuta, with Pastor Ashimolowo. The next adjourned date is May 25, 2017. The court has not delivered its judgment.

“I have all the papers to prove that the land belongs to my family and I have shown them to the police. Immediately I learnt about the demolition, I reported at the Mowe Police Division. But by the time policemen from the station got there, they had left.”