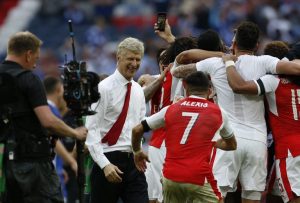 Wenger has now won the FA Cup a record seven times, but uncertainty hangs over the 67-year-old heading into the close-season.

Heavily criticised by Arsenal fans furious at the club’s failure to qualify for the Champions League for the first time in 20 years, Wenger is yet to confirm if he will stay in charge next season.

Wenger’s contract expires at the end of the campaign, but he remains popular with Arsenal’s players and Ramsey made it clear he wants his boss to extend his 21-year reign.

Pinpointing Wenger’s decision to switch to a three-man defence late in the season as the key to Arsenal’s FA Cup glory, Ramsey said: “Of course I want him to stay at club. He deserves this.

“We changed the formation and had a lot of success.

“Fair play to him, he changed the system. Hopefully, he’ll be there next season.”

Arsenal have won the FA Cup three times in the last four seasons and Ramsey has now bagged the winner twice.

The 26-year-old also scored the decisive goal in the 2014 final victory over Hull.

“I can’t describe this. It’s been an up and down season but we’ve finished with the FA Cup so it has to be successful,” he said.

“I’ve got the winner again. I love this competition. The boys deserve this.

“I’m happy for the manager. To get another FA Cup, I’m delighted.”

Arsenal forward Danny Welbeck didn’t get on the scoresheet, but he was a threat to Chelsea’s defence with his tireless running and astute movement.

The former Manchester United star praised his team-mates for refusing to let their spirits drop after Diego Costa’s late equaliser threatened to spoil the party.

“We stuck in there when it looks like things were against us,” he said.

“You always worry when you are a goal down and it was a game full of surprises. It was a great team performance.”