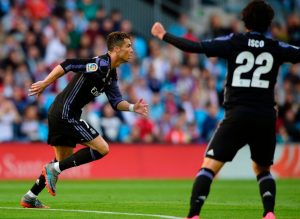 Real Madrid just need one point in their last league game against Malaga after winning their outstanding game against Celta Vigo. Cristiano Ronaldo scored a brace while Karim Benzema and Toni Kroos scored one goal each.

Celta put up a brave fight in the rearranged fixture, even when reduced to 10 men for the final 30 minutes.

In the end, Real proved too strong and now require just one point from their trip to Malaga on Sunday.

Madrid have 90 points from 37 games while Barcelona have 87points from the same number of games.