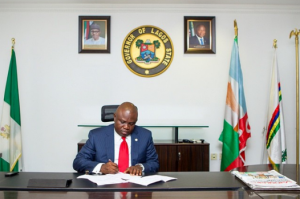 There have been so much drama behind the sack of the immediate past Presiding Chaplain of the Chapel of Christ the Light, Alausa, Lagos State, who was removed from his post allegedly on the orders of Governor Akinwunmi Ambode for breaching church protocols and had a long standing disciplinary problems with the church, letters and correspondences seen.

Femi Taiwo, who was removed on May 15, was also ordered out of his official quarters within 24 hours of receiving the letter.

Media reports suggested Mr. Taiwo’s removal came after his actions during an anointing service on May 14 angered the Lagos State governor’s wife, Bolanle Ambode, who was in attendance.

The reports said Mrs. Ambode waited endlessly as she joined a queue to be anointed without any preference accorded her; and that she left the church in anger after been anointed.

But a series of letters and correspondences reviewed by PREMIUM TIMES showed that Mr. Taiwo’s problems with the church predated the event of May 14.

“The point is that he (Mr. Taiwo) disregarded rules to go and meet the First Lady without authorisation, out of selfish interest,” a source at the church told PREMIUM TIMES.

In late February this year, Mr. Taiwo had paid an ‘authorised visit’ to Mrs. Ambode without the knowledge of the church’s Governing Council; but he allegedly lied to the governor’s wife that he was sent by the Council.

At the meeting, Mr. Taiwo, those familiar with the matter said, schooled the First Lady on why he should be the “alpha and omega” on anything spiritual concerning Governor Ambode and his family.

He also reportedly cited the church’s constitution repeatedly to convince the First Lady to always respect his office and powers.

“He told the First Lady that the small church inside the State House should be reporting to him. And that he would withdraw some of the staff if his demands were not granted, almost threatening the First Lady,” one official said.

Mrs. Ambode, one of our sources said, was shocked by the clergyman’s attitude, and she promptly contacted the church’s Governing Council to complain.

The Council “was shocked that Mr. Taiwo, a supposed man of God, could lie and misrepresent himself to the First Lady, and immediately queried the clergyman, demanding explanation.”

“Please, note that your action was at your behest and not the Governing Council. We learnt that you went with a copy of the constitution, explaining the content to her.

“Kindly recall that an emergency meeting was summoned on Wednesday, 1st March 2017, where you claimed that you never mentioned to Her Excellency that Governing Council mandated you. In order not to put the Governing Council in disrepute, respond in writing your position on same.”

Following the Council’s query to him, Mr. Taiwo wrote a letter of apology, dated March 10, and addressed to Mrs. Ambode stating that the purpose of his visit was not to undermine the First Lady or her office.

“I write to tender a sincere apology to you on the matter surrounding our visit to Your Excellency recently,” the chaplain wrote.

“In honesty, I have high regard for you and see you as mother to all. Your effort in building the Chapel and the State in general is highly appreciated and we pray God to continue to strengthen you the more.

“I am very sorry for any embarrassment our visit might have caused you and I plead you find a place in your heart to forgive.”

Although Mr. Taiwo apologized to Mrs. Ambode concerning the February 14 incident, he remained consistently hostile and disrespectful of the First Lady, culminating in the May 14 incident that may have quickened his removal, one of our sources said.

“The truth is that as a continuation of his hostility towards the woman, he was openly disrespectful to the First Lady at the annointing service. Yet, the First Lady waited through it and never left in anger.”

Another official said the pastor “remained perpectually angry because “another person was made a Special Adviser to the Governor on Religious Matters and assumed wrongly that as the chaplain, it was his duty to play such roles and to act as the spiritual father to the First Family.”

“He was consistently pestering the First Lady with a litany of requests, and was repeatedly advised by the Governing Council. But he does not appear to have any respect for constituted authorities as advised by the Bible.”

The source added that the Governing Council was also crossed with the pastor for allegedly converting the church’s bus to his personal use.

The chaplain failed to make amends, an official said.

Repeated telephone calls to Mr. Taiwo on Saturday night were not answered.

But The Punch, which first reported the matter, quoted the former chaplain as saying “I have tried as a pastor to live above board. It will not be right engaging the church or the government on the pages of a newspaper.”

An email to Ayo Oyadotun, the new chaplain at the church, was not replied either.

Contacted, the Commissioner for Information and Strategy, Steve Ayorinde, declined to comment on the pastor’s removal, saying, “We don’t want to engage anyone on this matter.”

But Mr. Ayorinde had told The Punch that “the former chaplain was queried a number of times in the past for conduct unbecoming of his office.

“The culmination of various indiscretions led to the Governing Council of the church issuing yet another query that led to his being relieved of his post.

“This has got nothing to do with the First Lady. The chaplain is looking for an excuse to cover his insouciance. It’s nothing but cheap blackmail.”