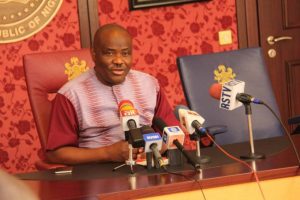 The Rivers State Government has told 159 students it sent abroad on scholarship that it is arranging funds for them to conclude their courses and return home.

The final year students are currently stranded in tertiary institutions overseas following the failure of the state government to remit their tuition fees and other allowances.

The students were sent abroad by the Rivers State Sustainable Development Agency, under a special scholarship initiated by the administration of former governor, Rotimi Amaechi.

Spread across countries in Europe, America and the Caribbeans, they were to graduate September last year but are being delayed as the state government has not released funds for the programme since December 2014.

Apart from their certificates being withheld, most of the students have also been thrown out of residential accommodation for failing to pay their rents.

Among them are 16 whose dream of becoming medical doctors is hanging in the balance.

Investigation by PREMIUM TIMES showed that the 16 medical students have been barred from clinical rotation by St. Vincent University in Ireland, pending settlement of their outstanding tuition fees.

Paul Babeye Adden from Ido in Asari-Tolu Local Government Area, the leader of the final year Rivers State medical students in the university, told this paper that each student pays $7,995 per semester.

“We are owing the school for five semesters, bringing the debts to $39,975 per student,” he said in a phone chat this newspaper had with a group of the students.

Apart from tuition fees, Mr. Adden said the state government was paying $1200 monthly for the upkeep and accommodation of each student, but this has not been paid for two years and five months now.

“I have been squatting with a friend since I was evicted from my apartment,” one of the students, Udochukwu Amadi, narrated his ordeal.

“The student Visa I am operating on does not have provision for me to work so I cannot even do a little side hustle to augment. I am totally helpless.

“We have repeatedly reached out to our state government, they keep promising that they will do something but all their promises have not translated into action which is what we desperately need.

“I was two months from finishing all my clinical rotations before we were suspended,” Mr. Amadi said.

Following several complaints by the affected students and people speaking for them, the state government said it would release funds to offset the bills owed by its students on scholarship who are stranded in countries across the globe “soonest”.

The RSSDA Director, Lawrence Pepple, told this paper on Monday that he received confirmation from the state government that funds would be released ‘soonest’ to institutions where the students have either graduated without collecting their certificates or some that may require few courses to round up.

He however could not disclose the amount to be released.

“We are currently working with parents of these students with a view to verifying the exact financial standing of these 159 students with their schools so that we do not credit the accounts of schools when in actual fact, parents may have cleared the fees and we will need to reimburse them instead of the schools. Each student is being treated on case by case basis.

“I am optimistic that before the end of next week a sizable number of these students will call you to update you with positive news”, Mr. Pepple said.

The overseas scholarship programme administered by the RSSDA has gulped more than N23.7 billion since its inception in the 2008/2009 academic session and had a target of sending 300 students overseas annually.

However, shortage of funds saw a situation where the students were abandoned to fend for themselves as the former Governor Amaechi-led administration owed them for several months before leaving office.

When Governor Nyesom Wike was sworn in May 2015, he vowed that despite the shortage of funds, he would ensure that those already abroad would successfully complete their studies but that new scholarships would not be awarded.

However, in a letter dated 6 February, 2016, to parents and guardians of the students, the government made a U-turn on its initial position and said it would no longer pay the tuition and allowances of the scholars due to shortage of funds.

Consequently it advised all of them to return home.

According to the directive, the only exception were the 159 students in final year of their programmes, who were to graduate by the end of 2016.

“All others will need to return to Nigeria to continue their studies; the government will continue to fully sponsor them. This way, all the students will still achieve the desired objective of successful graduation in your chosen fields of study,” the letter read.

Mr. Pepple had said that the Nyesom Wike-led government had released over N2 billion to clear the arrears being owed by the previous government under the programme.

But the students said they have yet to receive any allowance from the government for about two and a half years now.

The students had written to Mr. Wike and the State House of Assembly speaker, Ikuini Owaji Ibani, in two letters dated July 4, 2015, explaining their ordeal and pleading with the government to come to their rescue.

But the plea of the indigent students has been to no avail.

“Nearly all governments at all levels, agencies, etc that were awarding overseas scholarships are grappling with the fall in the earnings of the Federal Government. The recession as well as the nosedive of the Naira and the opposite skyrocketing of forex have drastically affected the capabilities of governments and agencies to continue to fund scholarship schemes.

“You may be aware of the pitiable conditions some Nigerian youths under schemes of the Presidential Amnesty Programme; State Governments, etc are living in abroad now,” the RSSDA boss said.