Deolu
A schoolteacher who went missing for some time, has been found dead inside a river, leaving family and fiend in complete pain. 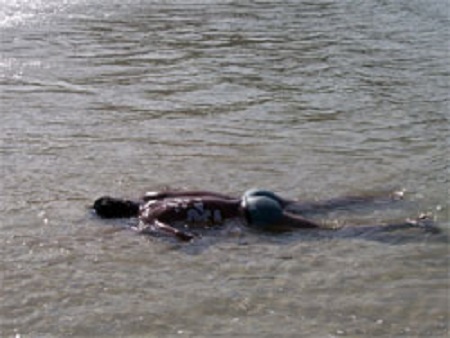 The body of Vincent Ncube, a teacher, who went missing after being swept away by flash floods on Sunday, was found in the middle of Gubazi River yesterday afternoon.
According to Daily Sun SA, Vincent Ncube, a 48-year-old teacher at Ntabasibahle Combined School in Qhudeni, northern KZN disappeared on Sunday night while crossing a bridge.
“The dead man went missing following torrential rains that swept through the province,” KwaZulu-Natal Co-operative Governance spokesman Lennox Mabaso said.
ER24 spokesman Russel Meiring said paramedics and the police search and rescue team arrived on the scene at noon.
His devastated family believe if he had listened to his friends’ warning not to cross he would still be alive.
His brother Bongani Ncube (55) said: “I think he didn’t listen because he thought his car was powerful.”
Bongani said Vincent was travelling with two friends.
“They were about to cross the Nanakazi River and the friends said they should not cross. When he didn’t listen they jumped out of the car,” said Bongani.
The friends saw Vincent’s Toyota bakkie being swept into the river.
“He tried to get out but was washed into the water,” said Bongani.
Meanwhile two other people drowned while crossing rivers in the Umlalazi Municipality on the KZN north coast at the weekend.