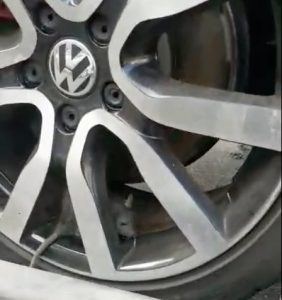 A car owner has blamed two rats for his car that was caught by fire on Friday.

After the fire had wreaked substantial havoc, rats were found in the car engine when the bonnet was eventually opened.

The car owner, Alec Steinfeld said his Volkswagen had been parked for about a week on his Brooklyn block when he tried to drive it to work Friday.

Steinfeld said he made it to Manhattan before there was smoke under the hood.

“It seemed like my engine was overheating and then all of a sudden it started catching fire,” he said. “I tried to open up my hood and there were two baby dead rats on the ledge so there was a lot of confusion.”

He called the emergency number and firefighters soon arrived on the scene.

“By the time the fire department came they actually had to smash open my windshield,” he said.

“After the fire was put out, a charred mom/dad rat camped out in the rims of my tire. Obviously, the culprit,” he wrote on Facebook.

A video Steinfeld captured of the fire and posted to the social media site shows the car on fire, but also pans away to perhaps an even more interesting sight: pro skateboarder Tony Hawk filming the scene with his own phone.

“My car caught on fire today,” Steinfeld wrote. “Luckily, Tony Hawk was there to capture the whole thing.”