The Sokoto State Government says it has recovered over N278 million paid to ghost workers on the payrolls of local governments in the past four months. 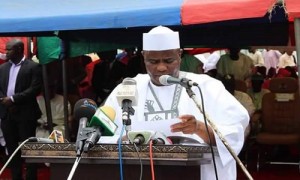 Governor Aminu Tambuwal disclosed this on Sunday during a stakeholders’ meeting of the All Progressives Congress held in Gwadabawa Local Government Area.

Mr. Tambuwal said the money was paid to the ghost workers’ bank accounts but was not claimed from the various banks.

“This was sequel to the centralisation of the payment of the salaries of workers of the local governments.

“About two weeks ago, some banks alerted the Commissioner of Local Governments about the existence of the unclaimed money,’’ the governor said.

He said the recent verification of council staff was aimed at ascertaining genuine workers.

“The exercise was not aimed at witch hunting anyone but to ascertain the actual workforce and monthly wage bill of the local governments,’’ Mr. Tambuwal said.

He said many farmers in the state were defaulting in repayment of agricultural loans obtained from commercial banks and assured the banks of the government’s support in recovering the money.

“The money belongs to the Central Bank of Nigeria and we will support any action to recover it.

“This is to enable other farmers to benefit from the gesture as the money is not a bonanza.’’

Mr. Tambuwal called on the people to continue to pray for President Muhammadu Buhari as well as for sustained peace and unity of Nigeria.