A Judiciary staff identified as Mr Godwin Udoaka was shot to death by a soldier attached to Wizchino Construction Company, at Asutan Street, Uyo, Akwa Ibom State around 12:45 pm on Wednesday. 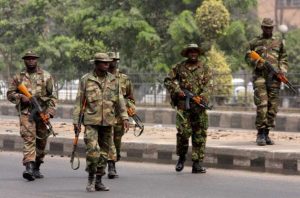 Udoaka, who works in the transport section of the judiciary as a driver, was said to have argued with the soldier who drove against traffic.

The soldier who was in a Toyota Hilux with Registration Number ABC 222 AY, was said to have come down and opened fire at Udoaka as the bullet broke through the vehicle windscreen to meet him on his eyebrow.

Son to Udoaka, Sifon Udoaka, said the soldier drove against the traffic blocked the road. He added that when his father asked them to give way so that he could pass, the soldier came out and shot him.

The president of Judiciary Staff Union of Nigeria in Akwa Ibom State, Mr Albert Mbebe, also confirmed that the soldiers came in opposite direction.

He said, “The WE Construction Company vehicle was driving in the opposition direction, that is against the traffic. They refused to go back so that other people could pass. It was the judiciary driver that had the right of way.

“While the judiciary driver insisted that the WE Construction Company vehicle driver goes back, the soldier came out of the vehicle and shot him. Their aim was to shoot and probably kill the driver. We are happy the driver is in the hospital recuperating, the vehicle is in bad shape.

“There are human beings within the ranks who are so callous, so power drunk, because they carry guns, you cannot disagree with them; this is something we must all rise against,” he said.

The Commissioner of Police, Mr Donald Awunah, said he was yet to be briefed on the incident as he is in Abuja.