A South African Lady has cried out after her ex-Nigerian-husband refused to let her be, assaulting her at all times that she lives in fear, even after divorcing him.
Read her heart-felt story below;
‘I didn’t want to publicize this but this is beyond my control. i cant even go to the shop without fearing that a man i once called my husband could come and kill me and leave me by the street to be eaten by dogs………he cheated multiple times i forgave that……all throughout the years he beat me up even’

While pregnant with his own children …..GUESS WHAT I FORGAVE HIM FOR THAT TOO. he stole from me, from my family LOL HE EVEN stole the ring he bought me and pawned it IN FACT HE PAWNED EVERYTHING WE OWNED EVEN A CAR FOR R5000 ……I still forgave him.even when his girlfriend sent me naked pics of them in bed and harassed me i still forgave that.’
‘AM I NOT HUMAN??DON’T I HAVE A BREAKING POINT??? STAY FOR THE KIDS SAKE THEY SAY!!!!!! UNTIL I’M DEAD? i moved out and stayed alone with my kids i cant even go to the shop without fearing that the will come and attack me.’

AS USUAL. HE took my bag took my phones and slapped me….his last words I WILL DISTURB YOU TILL U DIE NO ONE LEAVES ME AND GETS TO MOVE ON IN PEACE………well even while still married to him i never did find peace,but he wouldn’t know coz he spent most of his nights out with friends, even christmas days were for him and his s***S …….IF ANYTHING HAPPENS TO ME ,AT LEAST YOU ALL KNOW NOW…….

My kids will grow up without a mother,,,,,and yeah i did try the police and got zero help from there i guess it true what people say the police only act when there’s a dead body. I guess SOON MY FAMILY WILL BE UPLOADING FUNERAL#NONHLE’SFUNERAL. 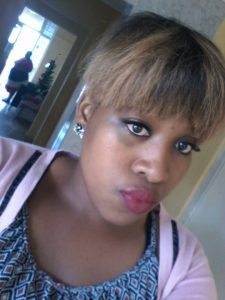 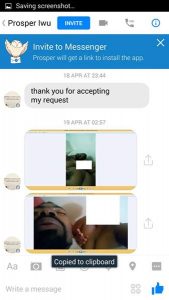 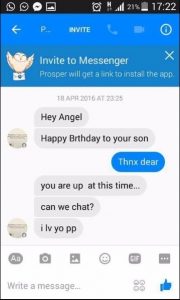 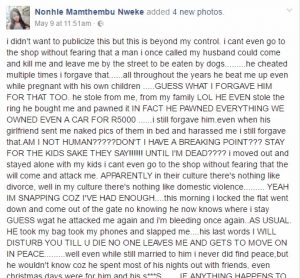 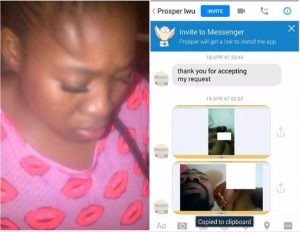