The wedding ceremony took place in an Abuja Court on Tuesday and pictures from the ceremony have since gone viral.

Musa’s teammates as well as the Nigeria Football Federation have sent out congratulatory messages to the Leicester City forward who allegedly divorced his former wife, Jamila, to now marry a new wife in Juliet.

While the Corsica game is barely 48 hours away, the tune up game against the Hawks of Togo is fixed for June 1 in Paris, France.

Musa did not enjoy the best of times in his maiden season in England as he failed to meet expectations having been signed by the Foxes for £16.6 million in July.

Musa scored only two league goals in his 21 appearances. 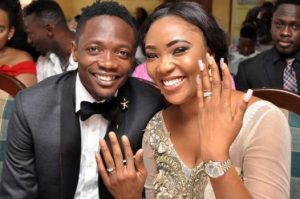