Super Eagles techical adviser, Gernot Rohr, has invited 24 players to  camp ahead of next week’s 2019 Africa Cup of Nations qualifying match against the Bafana Bafana of South Africa. 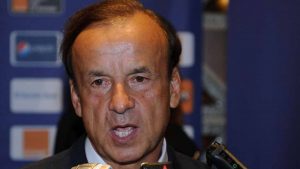 All invited players are expected in Abuja on Friday, 2nd June with the team to train on Monday, 5th June before departing to Uyo on Tuesday.

The Super Eagles trade tackles with the Bafana Bafana at the Godswill Akpabio International Stadium, Uyo on Saturday, 10th June 2017, starting from 5pm.