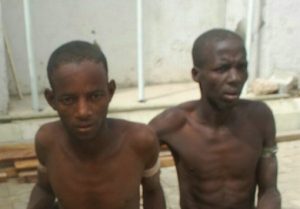 A suspected Boko Haram member identified as Bala Ibrahim were arrested by the Troops of Forward Operation Base, Fika on routine patrol  on Saturday.

He is believed to be a top member of the sect.

According to investigations by the troops, it was  revealed that the 30-year-old suspect is an indigene of Bulabulin village in Fika Local Government Area of Yobe State, North-East Nigeria.

A statement from the Director of Army Public Relations, Brigadier-General Sani Usman, said he is further being interrogated.

The statement added that following a tip off, troops deployed at Forward Operation Base, Yuga similarly ambushed and arrested four suspected kidnappers at Mundu village.

“The suspects, Yahaya Auta, aged 25; Salisu Lawal, aged 20 years; Umar Mohammed, aged 18 years; and Samaila Abubakar, were found to be in possession of one locally made six-loader single barrel gun, one empty cartridge, two machetes, a knife, two mobile telephone handsets, two packets of Tramol tablets and the sum of 360 naira, while on their way to commit crime,” the statement added.