Home News Feed Tears Flow as Horrible Tragedy Hits Anthony Enahoro’s Family in Benin City
Facebook
Twitter
WhatsApp
The family of the late Anthony Enahoro has been thrown into serious mourning as it gets hit with a horrible tragedy. 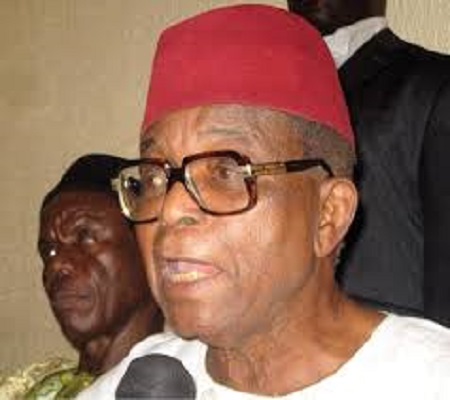 Mr. Kenneth Enahoro, first son to late elderstatesman, Chief Anthony Enahoro is dead. He died on Sunday at the age of 63, ThisDay reports.
Briefing journalists in Benin City, at the family residence, 10 Aideyan Street, immediate younger brother to the deceased, Mr. Eugene Enahoro said his elder brother led a fulfilled life and that no foul play is suspected over his death.
“When a man passes on, you do not suspect any foul play. You do not begin to talk about whether he was sick or not but as long he is aged, God has called him. He survived long enough to bury his own father and he survived by two children.
“The matter on ground now is his children. He has basically retired having buried his father but he was engaged in politics behind the scene. I personally I am not a politician so I am not too much into that. His political friends will do that.
“But it is unfortunate for the family because since the beginning of this year, this has been the third lost we had in the family.
“It is only God that knows how long we are going to live on this earth but I will say that he was my very good friend and he lived a very good and fruitful life. Because the important thing in life are those whom you leave behind.
” For those of you who are younger it shows the important of getting your life together very quickly because in our culture, what we pray for is that it is not strangers that bury us. So he has a family and he has children. I am younger than him. So, obviously it rest upon me now to take charge of his affairs”, he said.
Eugene noted that the only thing that saddened his heart about his elder brother’s death was that he did not live to carry his grand children.
“He was 63 years old, one year senior to me but he has grown up children but unfortunately both children are graduates. The only one regret it would be like unlike me that has seen my grand children, he was looking forward to see his grand child because his daughter is due to get married this year. That is a bit unfortunate but again, we believe in reincarnation so maybe when his daughter gets married and the child comes, my brother back again with us” he said.
He described his late elder brother as his best friend and that he would miss his words of advise.
Presently, a condolence register has been opened in honour of the junior Enahoro at his family’s residence at 10 Adeyan Street, Benin City.
Amongst the early callers who signed the condolence register were Mr. Charles Imoloame Charlimo, Messrs Emon Marier, Lady Dora Ogbu and others.
Mr. Charles Imoloame Charlimo described the death of Mr. Kenneth Enahoro as shocking and prayed God Almighty to grant him an eternal rest
” I received the news of your death with great shock and surprise. We pray that God keeps you peacefully in his bosom and grant you eternal rest amen”, he said.
While Emon Marier described him as a man with a great wisdom.
“Uncle you were too kind and open to all. Your advice and wisdom in matters will be greatly missed”, he said
Also, Lady Dora Ogbu said it was the will of God Almighty that he was called. She prayed that God should grant him a perfect peace.
“It is the will of God Almighty that you are called. May your gentle soul rest in perfect peace. Amen”, she said