Home National News Find out how three white men converts to Islam in Yola
Facebook
Twitter
WhatsApp
Three American professors at the American University of Nigeria (AUN) have converted to Islam in Yola. The professors who converted were identified as, Lionel Rawlins, Gabriel Foster and Tristan Porvis.
Rawlins is a retired American marine officer and the head of security at the AUN, Foster is the Director of printing press in AUN and Porvis is a senior lecturer at the university. AUN Chief Imam, Ustaz Dauda Bello, presented the professors to the Muslim community during a Jumat service.
It was gathered that Bello administered the initiation prayers to the professors who accepted by the Muslim community.
The professors expressed that they decided to convert to Islam after careful study of the religion. They further said they are now convinced that Islam is the best way of life. 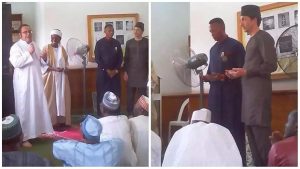