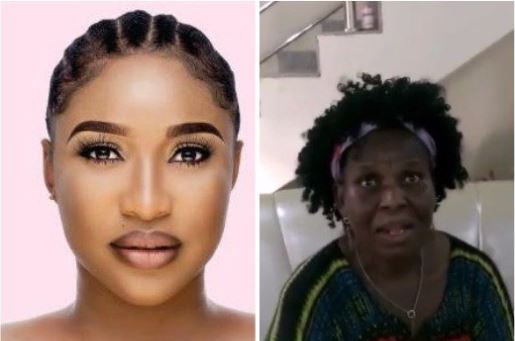 Rivers State-born Nollywood actress, Tonto Dikeh, has refused to comment on the latest allegation levelled against her by the estranged nanny of her son, Mrs. Mgbechi Enyinnaya, who said that she subjected her to all forms of emotional and psychological abuse while working for her.

In an interview with Punch, the 56-year-old woman accused Dikeh of telling lies against her while revealing that against what most people actually know and believe, it was the star actress who was in fact assaulting her husband, Olakunle Churchill, physically.

According to the Imo State native, she saw the other side of the light-complexioned actress in the period she lived with and took care of their son, King.

Enyinnaya’s stance follows a video posted on the internet recently showing her being questioned by the actress in company with others. In the clip that went viral, the distressed woman could be seen defending herself as the actress accused her of collaborating with others she claimed were out to smear her name by pretending to be sick and abandoned in the hospital.

The actress, in the video, also accused the nanny of not being appreciative of everything she had done for her, especially the regular monetary and clothing gifts she gave her for her children.

In a disclaimer posted through the Instagram page of her friend, Halima Abubakar, warning members of the public not to pay money into Enyinnaya’s account, Dikeh claimed to have done so much for the woman including taking her to at least 15 countries in under seven months on top of feeding her six times in a day – a claim the 56-year-old denied strongly.

While telling Saturday Beats that the video posted online by the actress was not the complete version of all that transpired between them on that day, the Imo native disclosed that only the part where she was being intimidated and not given a chance to speak was shown.

She said, “All that Tonto has said in that video and disclaimer are all lies. She is hiding the truth from the world because I have never collaborated with anybody to spoil her name. She is doing all these to get back at me because I refused to lie against her husband when she approached me to say that I saw him beating her when in fact she is the one that I had seen on several occasions raising her hands against him.

“If indeed she had taken me to 15 countries as claimed, let her show the world my passport and all the visas. She also said I ate six times a day while working for her, how possible is that? Am I a glutton to eat that much in a day and how has she been able to keep count of this?

“I have nothing against her, I am not just happy that after serving her diligently, she could treat me this way. It was through the help of a few kind people that I manage to find my way out of Abuja after she locked me outside with my things. I have no grudge against her; she should just stop telling lies against me.”

Calls and a text message put across to the actress’ mobile telephone number on Thursday by Saturday Beats weren’t responded to. This was four days after a similar message demanding her comments on the issue was sent to her by the reporter.

Even though a lady called back through another line and promised to react to the matter 20 minutes later after the message had been delivered to Dikeh’s number, there has been no response since that period.