It is a day of rest but it turned out to be a day of mourning in Benin City as three persons, including a retired policeman and his wife, were crushed to death on Sunday while on their way to churches in Makurdi, the Benue State capital. 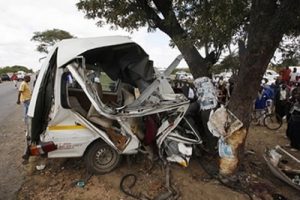 According to an eyewitness report, he said the incident happened around 10.45am near Modern Market Junction, opposite Dunamis International Gospel Centre, Makurdi.

The third person was said to be a member of Dunamis church.

The man and his wife were said to be riding on a motorcycle and heading for the church when the truck ran into them, killing them and the passerby.

Our correspondent gathered that the driver of the truck with number plate, XB 969 GBK, loaded with sharp sand, lost control at the Modern Market Junction in an attempt to avoid hitting a car.

An eyewitness said, “The truck then drifted to the other side of the road and hit the man and his wife, who were on a motorcycle going to Assemblies of God Church around the Wadata area of Makurdi.

The eyewitness said the driver of the truck escaped immediately after the accident occurred.

He said, “The whole thing happened suddenly. Five persons were inside the car.  Nothing happened to the driver. He later escaped from the scene of the accident.”

The remains of the victims were removed by the police and taken to the morgue at the Federal Medical Centre, Makurdi.

When our correspondent visited the FMC mortuary, the elder brother of the late retired policeman, Edem Obaah, identified the couple.

He said, ‘‘The deceased was my younger brother. He is Patrick Obaah; and his late wife is Janet Obaah. My name is Edem Obaah. Patrick retired from active service last month. I am also a police officer; I am still serving.

“I was inside church when his first daughter called to inform me that her parents were involved in an accident. On reaching there, I saw their bodies and I called the police. When the police came, I was able to identify  my brother and his wife, but we have yet to trace the owner of the truck.’’

Yamu said, “There was a ghastly accident involving a motorcycle and a truck, during which a man and his wife died on the spot.’’