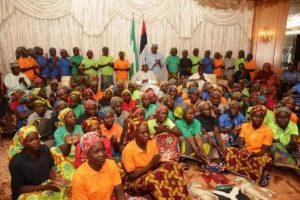 of the over 100 Chibok schoolgirls who are still in captive  of Boko Haram.

It also welcomed the recent release of 82 Chibok girls in North-Eastern Nigeria and appealed to all citizens in the country to support the Federal Government’s reintegration programme for the girls.

The UN’s Deputy Humanitarian Coordinator, Peter Lundberg, disclosed this in a statement issued by the global organisation and made available to journalists in Abuja on Tuesday by Oxfam Nigeria.

Lundberg said, “The United Nations welcomes the release of the 82 Chibok girls in North-Eastern Nigeria and appeals to all Nigerians, including the families and communities of the liberated girls, to fully embrace them and provide all necessary support to ensure their reintegration into society.

“Over 100 of these school girls are still unaccounted for, and the United Nations urges the international community to continue supporting the government of Nigeria in its efforts to ensure the release, rehabilitation and reintegration of all the children, women and men who are victims of Boko Haram.”

The UN, in its statement, further noted that despite the encouraging news of the recent release of the 82 schoolgirls, insecurity had continue to affect millions of people living in six states in North-Eastern Nigeria amid a deepening humanitarian crisis.

It said three states in the region were highly affected by the deepening humanitarian crisis, but pledged to continue supporting the Federal Government through the provision of the needed relief items.

The global organisation said, “Borno, Adamawa and Yobe States, where 8.5 million people are in need of life-saving humanitarian assistance and protection, are the most directly affected by conflict and mass forced displacement.

“The United Nations and partners are committed to supporting the government of Nigeria to providing much needed relief to these vulnerable people.”