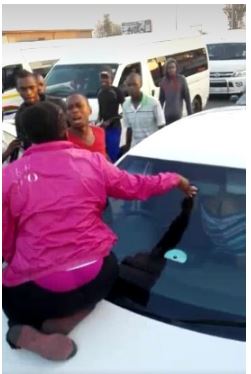 In a bid to stop him from driving off with a side chick, an unidentified South African woman climbed her husband’s car bonnet and held on even as he drove on the road.

The trending video shared on facebook by Norah Pitje has gotten several reactions from online users.

Norah wrote; “This woman found her man with his side chick. She somehow jumped on the car and the idiot man protecting his side chick so badly drove with her on his bonnet”

The public display got the attention of a crowd who later convinced the woman to come down from the car.