Arsenal manager, Arsene Wenger, has confirmed that  a decision on his future at the club will be made at a board meeting following their FA Cup final clash against Chelsea later this month.

Wenger who was speaking at a news conference on Friday said, “I don’t know (what will happen in the meeting).

“There are many aspects of a football club which has to be discussed at a board meeting. One of those is what happens with the manager, the players coming in, contract renewals.

“The most important thing is to win the football game. What happens to me after that is less important.”

When asked whether a decision will be announced shortly after the FA Cup final on 27 May, he replied, “Of course.”

The north London club are relying on an upset to secure Champions League qualification. They are sitting fifth in the standings, one point behind fourth-placed Liverpool and three behind third-placed Manchester City.

Liverpool host already-relegated Middlesbrough and Manchester City travel to Watford, who languish 16th in the standings.

Arsenal have won their last four league games and Wenger expected his side to focus on their own performance ahead of the final weekend of the season.

Wenger added, “We just want everybody to play 100 percent in last game as is the tradition in England.

“We have to do our job, we are professionals. We are on a good run and that’s all we can do.”

When asked about the injured players in his team, he said  Aaron Ramsey has recovered in time for the weekend’s clash while Alex Oxlade-Chamberlain remained on the sidelines with an hamstring injury.

He also said he was yet to make a decision on the availability of defender Laurent Koscielny, who missed the last game with an Achilles injury.

The Frenchman is out of contract at the Emirates at the end of the campaign as he prepares for the final Premier League game of the season against Everton with a hope to finish in the top-four for the 21st consecutive season. 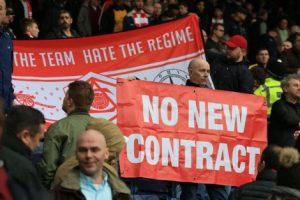